Sometimes Firefighters go above and beyond the call of duty and get personally involved to assist a Citizen after a 9-1-1 call.  This was the case with Oakland Fire Captain Nick Luby on April 15, 2012.  Nick and his crew from Station 12 responded to a call at the Oakland Amtrak station to assist an 83 y/o male who rode the trains for five days from Wilkes-Barre, PA.  Nick’s letter to the Fire Chief of Wilkes-Barre requesting assistance details Mr. Esser’s eventful journey and demonstrates to what extent one Firefighter’s care and compassion can extend beyond the badge….. 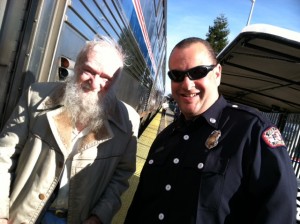 Chief Delaney,
I hope this email finds you well.

My name is  Nick Luby and I am a Captain with the Oakland Fire Department located in Northern California. I have had an interesting and rewarding past three days assisting a resident of Wilkes Barre.

Last Sunday (4/15) my engine company responded to an EMS call at our Amtrak station for an 83/m. This is when I met Mr. Esser from Wilkes Barre. Mr. Esser had been a resident of an apartment building on Pine St in Wilkes Barre that was damaged in a fire in early March I believe. He become homeless due to that tragic event. Apparently he had spoken with a friend a few months prior to the fire who lived in San Francisco and was given an invitation to come stay with him if he ever needed to. Mr. Esser decided to head west last week (apparently with out calling his friend first). Upon his arrival in Oakland he attempted to contact his friend, unfortunately his friend had passed away. During his travels West he began not to feel well. He called 911 upon his arrival in Oakland on Sunday,  this is when we met. We discussed how he got here, why he came west, and what his plans were while we waited for the transporting ambulance to arrive. He advised us he wanted to go home to Wilkes Barre. He told us he only had $10 and was planning to hop on freight trains to get back east. I have say our jaws dropped when we heard this plan of his.

He was transported to Summitt Medical Center to receive care. My crew and I knew we had to do an intervention of some sort to prevent an 83/m from using freight trains to try and get home. So I contacted our own non-profit that was created by our own firefighters. It is called “Oakland Fire Random Acts of Kindness”. That evening I told the Coordinator about Mr. Esser and his plan to get home. Without hesitation the funds to purchase him a ticket was approved.

Monday morning I contacted the hospital and spoke with the social worker that was working with Mr. Esser. She was able to confirm his story and wishes to return home. She spoke with his primary care physician in Wilkes Barre and confirmed that no family was available to assist with his current situation.I am happy to say that his medical condition has improved and I was contacted today by the social worker who advised that they wanted to discharge him today (Wednesday).  That was an issue because the train doesn’t leave until tomorrow AM. So the social worker worked her magic and Mr. Esser is staying one more night at Summit. Random Acts has purchased him a ticket to get from Oakland to Harrisburg. He will be departing Thursday morning and is scheduled to arrive in Harrisburg on Sunday April 22 at 1245 hrs. I spoke to a gentleman named Dave with your department this evening who advised that there is Greyhound bus service to Wilkes Barre from Harrisburg. So we have given Mr. Esser $40 to purchase a ticket for the bus. We are also giving him an additional $40 and a care package so he can eat during his four day journey back home.

The social worker has given him information on homeless shelters in the Wilkes Barre area. Mr. Esser seems to think that his old landlord will be able to help him with finding some housing on his fixed income. 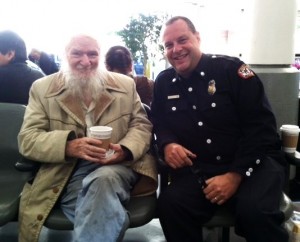 Now that you have listened to my long story I do have a request for you. Is there any chance someone from your organization could assist Mr. Esser upon his arrival at the Greyhound station. Maybe just to give him a ride to a shelter or a friends house. It would be two fold, it would help him and let your fire department family in Oakland know that our attempt to help Mr. Esser was successful.

His train doesn’t arrive into Harrisburg until 1245 hrs on Sunday April 22nd. So the first bus that he will be able to get on to head to Wilkes Barre will not leave until Monday morning at 0700 hrs and will arrive in Wilkes Barre at 0915 hrs. I am not sure where he will spend the night in Harrisburg while waiting for the bus, hopefully he can sleep in the bus or train station.

I will be taking him personally from the hospital to the train station in the morning and make sure he gets on the train safely. Since he has no cell phone I will loose contact with him. If you are able greet Mr. Esser upon his arrival home the best I can do is send you a photo of him to assist with locating him at the bus station.

Thank you for taking the time to read this and I hope someone on your end will be able to greet Mr. Esser upon his arrival. Below you will also find the link to our non-profit organization, Oakland Firefighters Random Acts, that is making all of this possible. If you have any interest in starting your own Random Acts of Kindness program do not hesitate contacting them.

Take care and I look forward to hearing from you.

Link to Citizen Voice news article about the fire that displaced Mr. Esser: