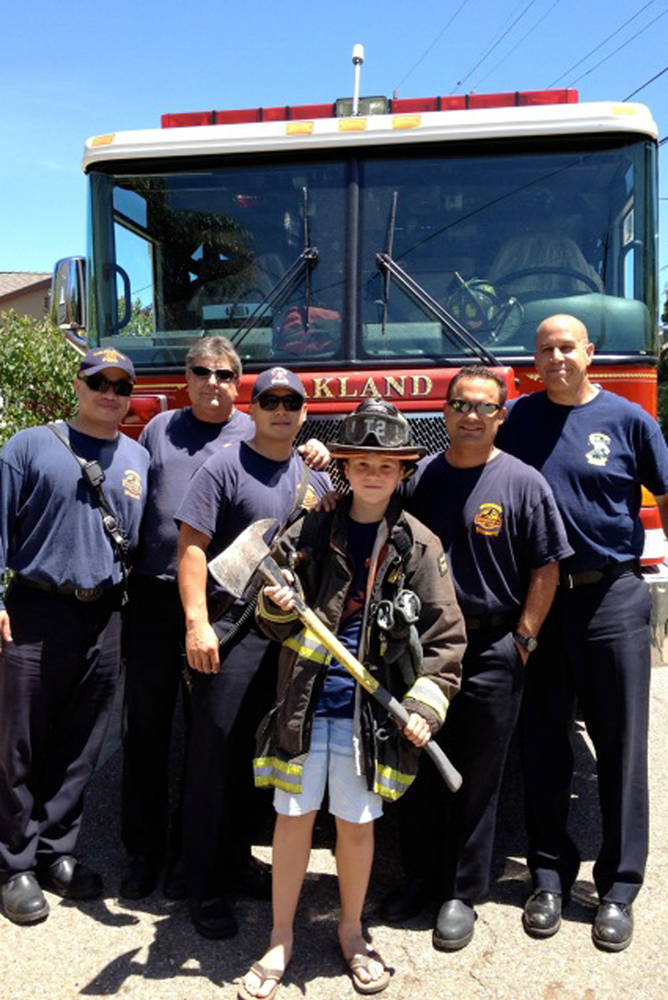 Early in 2013 an OFD Firefighter let us know that he found out on social media that a young 12 year-old boy was raising money for us.  His name was Ben Muchin.  He loved Firefighters and found Oakland Firefighters Random Acts on the internet.  He decided that for his Bar Mitzvah project he would hold a multi-family garage sale and participate in a 5k run to raise funds for Random Acts.  When we got wind of this, Oakland Firefighters dropped by with the parade fire engine to surprise Ben at his house during the garage sale.  The crew from Station 4 also dropped by with their fire truck and took a photo with Ben dressed in turnouts, a fire helmet, carrying an ax.

We thought this was so special that we contacted Ben’s mom and planned a little surprise for her son.  When someone donates money for a non-profit they usually write a check and then receive a thank you letter.  That is pretty much it.  So, one day when Ben and his parents dropped by a fire station to just say “hello” we took Ben and his parents on a Random Act to see exactly where his money was going into the community of Oakland. KTVU gave us a videographer for the day and Ben’s life will never be the same.  He never expected what happened.  Please enjoy the video below. We need more BEN’s in the world!

Watch a video of Ben’s Random Act of Kindness