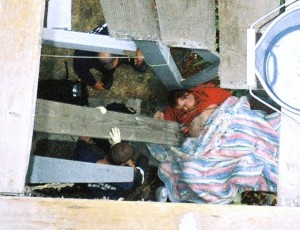 While on a 911 call in Oakland, the fire crew of Station 16 responded to a collapse of a 3rd story exterior staircase.  Standing on that staircase was a young man named Andy Pumphrey and his 2 year-old niece.  As the stair case collapsed without warning, Andy grabbed Rory and hugged her tight and fell backwards using his own body as a shield to protect her.  Rory landed on Andy’s chest and escaped from injury with only a few scratches.  She went to get help from her mother who thought Rory was hurt when she saw blood on her.  But, the blood was from a gash on Andy’s head.  The fire crew arrived and found Andy in a pile of rubble.  He could no longer move or feel his arms and legs.  The Firefighters did what they were trained to do.  They carefully assessed Andy, performed C-spine immobilization, strapped him onto a back board, and then loaded him into a waiting ambulance.  This is normally where a fire crew would disconnect and wait for the next call. 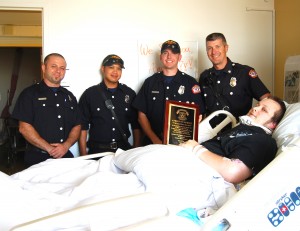 Andy was left as a quadriplegic at Highland Hospital.  His back was broken in five places, and he was paralyzed from the chest down.  His sister was told that it did not look good for Andy and that he would never walk again.  The crew that responded to the call contacted Random Acts to ask for toys to bring to Rory, and to nominate Andy for one of our Citizen Hero Awards.  When the Firefighters showed up at the house, Andy’s sister just thought she had to sign some paperwork.  She was blown away that these first responders were returning to their house to bring toys for Rory.  The crew went to Highland Hospital to present the Citizen Hero Award plaque to Andy in the presence of his nurses and attendants.  They were there to inspire him and let him know not to ever give up.  They told Andy that the next time they saw him they wanted him to walk into their fire station. 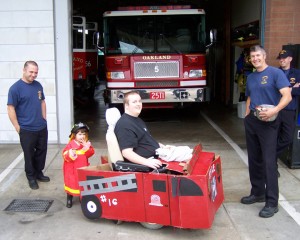 Last Halloween Andy showed up at Station 16 in a wheel chair dressed as a Fire Engine.  Rory was dressed as a Firefighter and sitting on his lap.  The crew fell in love with Andy’s niece and she with them.  Andy agreed to an operation that had little hope for success but took the chance.  He began to be able to feel his arms and legs.  He began working hard and lost 45 pounds.  His arms were coming back.  His sister and her family along with the Oakland Firefighters continued to encourage him. 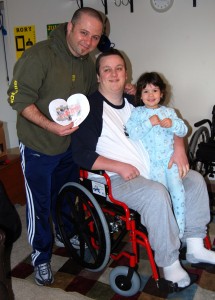 Then the State of California came and took his loaner wheel chair back.  They said he could sit for a few months till they could get another one.  He was devastated.  Well, once again, one of the Firefighters on the crew that responded to him showed up at his house with a brand new wheel chair.  Andy was back on track.

Last April at our Annual Awards and Dinner Dance, Andy was recognized as our Citizen Hero of the Year.  The crew that saved him told the story as Andy was wheeled up to the stage.  They gave Andy the award as his sister told how these 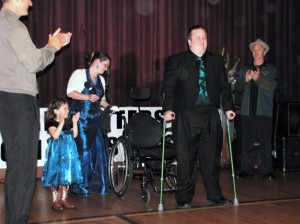 Firefighters had kept them going – pretty emotional.  Then she said that Andy had something to give the crew.  He stood up out of the wheel chair with some short crutches and walked a few steps over to the crew members to hug them and say thanks.  The cheers and tears left the crew in awe of what they had helped to do. 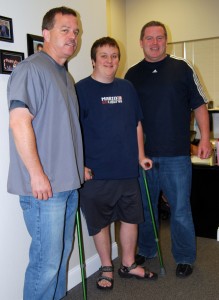 In fact, we had told Andy, in jest, to hurry up and get walking again so 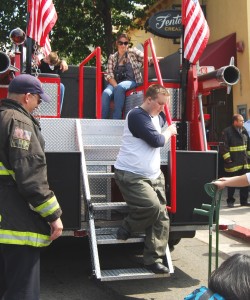 we could use the wheel chair for someone who really needs it.  We told him that when he could climb the stairs of our parade fire engine we would take him and his niece to Fentons Creamery for ice cream.  His sister called last week and said he is ready!  We picked Andy up  with his niece in Emeryville where he lives with his sister and then drove them to Fentons where the fire crew, and many others who have touched his life, were there to surprise him.  The real surprise (and the crew did not know this) was that Andy created one of those huge checks to give back and presented it to the crew to do another Random Act when they came across someone who needed help.  This was Andy’s finish line at Fentons! 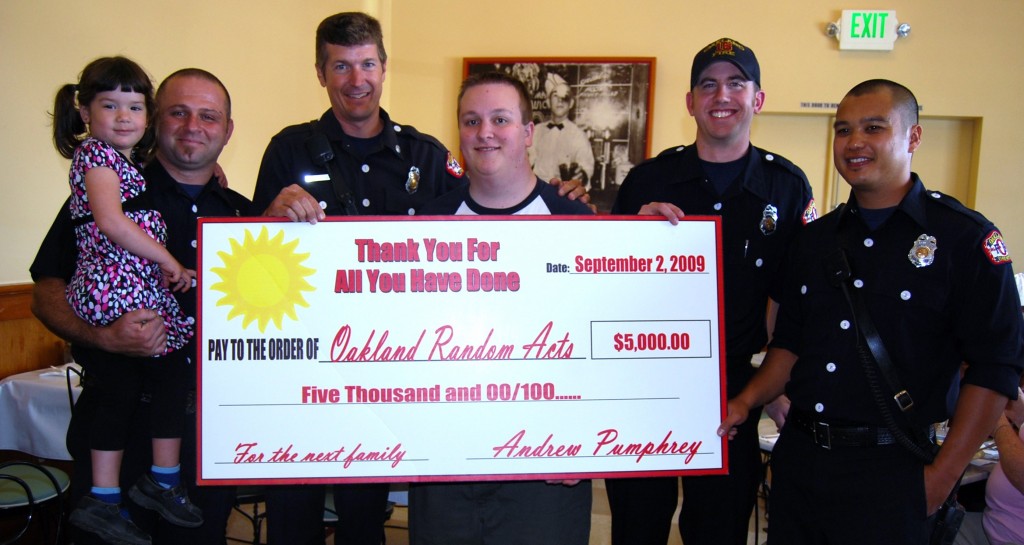 Watch the video of the Random Act of Kindness for Andy Pumphrey
https://www.youtube.com/watch?v=33zCuYLPD78